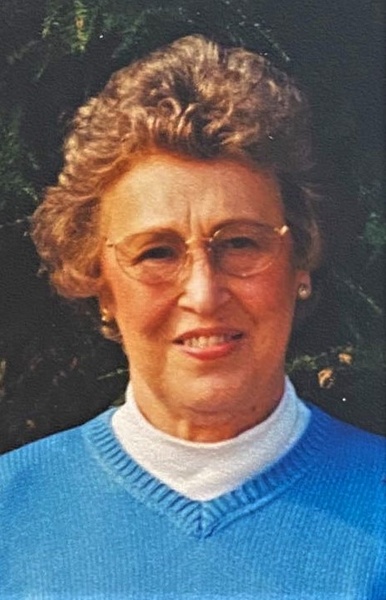 Shirley Jean Smith Brewer was born on Feb 25, 1928 and passed away peacefully on February 12, 2020 at Cambridge Hills in Pittsboro, NC. Shirley was the eldest of five children born to J. Lytle Smith and Nell Perry Smith in Siler City. Heaven will be well fed and taken care of now that Mom is there and reunited with her family and friends. Dad will no longer have an empty glass of tea! Shirley graduated as the Valedictorian of Siler City High School in 1945 and attended Women's College in Greensboro. After her graduation, she went to work for Liberty Hosiery serving as the Executive Assistant to the owner, Mr. Watkins and also as the bookkeeper. She was a lifelong member of the First Methodist Church in Siler City where her grandfather was one of the first pastors in the 1800's. Shirley married her high school sweetheart, James Lambe Brewer, on 12-3-1949 and moved to San Diego, Ca where James was deployed while serving in the Navy. They returned in 1955 and she returned to work at Liberty Hosiery. Shirley and James built Brewer Realty and Insurance in Siler City where she served as the bookkeeper for over 40 years and with James, built numerous homes in and around Siler City. Mom was an extremely energetic person and always had to stay busy and excelled in whatever project she was working on or whatever job she was performing, usually humming or singing as she worked-she always said it was important to get it right the first time. She had an extremely funny sense of humor and always found something to laugh about, much of the time it was Beenie Weenie's hair! Mom was a true Southern lady that was totally devoted to her husband, children, family, friends and community-her door was always open and her table always had a seat for more. She was an outstanding cook and famous for her meals whether planned or unplanned and oftentimes she may prepare a meal for 5 and be able to feed any number of people that any of us brought home, especially Jimmy. Mom thoroughly enjoyed hosting her extended family gatherings of 20 or more for most holidays where she would prepare the entire meal, except for the "bullets". She was famous for "Shirley's pickles"- all the cousins showed up to visit in the late summer when the pickles were ready- her pimiento cheese, her chicken salad, her homemade vegetable soup, her pound cakes and desserts and never let a glass empty of her very sweet tea. Mom always felt that if you didn't feel good, you just needed something to eat! Mom also enjoyed sewing and was always available to hem, take in or let out our clothes when needed and she took pride in the fact she made most of her clothes growing up, including her wedding gown. She loved to shop-a passion she enjoyed up to the last months of her life as evidenced by the closets of shoes and clothes. Her family and friends will always enjoy looking through the numerous scrapbooks and photo albums she compiled for her family and through all the periods of her life. Shirley served various groups in town including the Art for the Hospital and the Ladies Auxilliary at the Hospital and she was most proud of her work with the First Methodist Church where she had the opportunity to chair the Parsonage committee she built the Methodist parsonage. Mom arranged meals for new residents in town and in the neighborhood, arranged many meals for families during a bereavement and cooked for many of her neighbors. Shirley was preceded in death by her parents, husband James of 57 years; her son Jimmy; and three of her four siblings, Doug Smith, Christine "Beenie Weenie" Alston, and Patricia Adkins She is survived by her daughter Jennifer Brewer McBee of Siler City; her son Jeff C. Brewer and wife Stephanie of Chattanooga, TN; her daughter in law Jan M. Brewer of Siler City; her grandchildren Ashley Brewer (Brian) of Siler City; Mary E. Brewer and partner Stacy of Salisbury; Blair Brewer Baxter (Heath) of Siler City; Curt McBee of Siler City, Anna McBee of Seattle, WA, Calver Brewer of Greensboro, Christopher Brewer of Chattanooga, TN and Margaret Addison Brewer of Chattanooga. Her great grandchildren Harrison, Hadley, Ella and Nora Grace, all of Siler City; and a sister, Nell S. Barksdale of Jamestown, NC. The family wishes to thank all of those that assisted Mom in her life and especially the close friendship and the outstanding care provided by her friend Jackie Headen. The family also wishes to thank the care given by Community Hospice and Dr. Byron Hoffman. A memorial service and celebration of life will be held at the First Methodist Church in Siler City on Saturday, February 15th at noon with the Reverend Carl Belcher and the Reverends Arnold and Jackie Headen officiating. Memorial contributions may be made to the First United Methodist Church Parsonage Fund, PO Box 212, 1101 W Raleigh St., Siler City, NC 27344 or to God's Way Fellowship Church, 1121 12th St., Siler City, NC 27344. Smith & Buckner Funeral Home is assisting the family. Online condolences may be made at www.pughfuneralhome.com.
To order memorial trees or send flowers to the family in memory of Shirley Jean Smith Brewer, please visit our flower store.