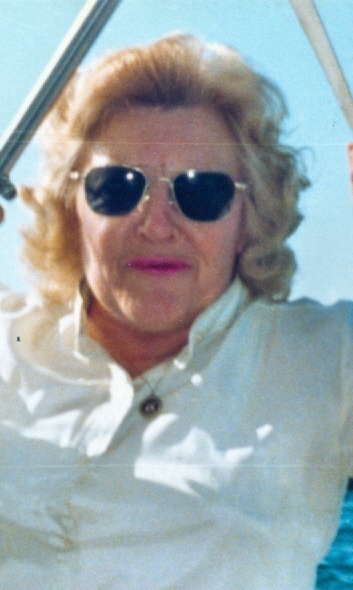 Odette DeFone Beasley of Siler City, NC, formerly Paris, France was born on December 20, 1923. She was born to the late Pierrie Defone and Jermaine Allemandet. She passed away on July 19th, 2016 at her daughter's home surrounded by her loving family and friends. She met her husband who was serving in the U.S Army in 1945 during World War II in France. She left her home in 1948 to come to the U.S with her spouse and daughter. She was employed by Blue Bell in Greensboro, then went on to run Frenchies Store at Rabbits Crossroads with her spouse until she retired. She is preceded in death by her spouse, William Bryant Beasley (1-1-1924- 8-16-1988); her son, JB Beasley (5-3-1948-12-25-1965); her daughter, Cosette Wilkie Bullard (2-13-1957-9-11-2000) and grandson, Scott Brigham (9-30-1970-12-18-1996). She is survived by her daughter, Barbara Kenworthy & husband Sam. She has five grandsons: Bryant Brigham & wife April of Hilton Head, SC, Mark Brigham & wife Angie of Bear Creek, NC, Ashley Wilkie, & wife Elizabeth of Siler City, NC, Cody Wilkie of Siler City, NC and Adam Bullard of Robbins, NC. She has 5 great-grandsons; three great- granddaughters and her brother, Christian Allemandet and nephew, Marc Allemandet both of Paris, France. Friends called her Mrs. Beasley, Frenchie, Fifi, and Mrs. B all of those who knew Mrs. Beasley knew that she was a no non-sense kind of lady, who loved hard; and was always a straight shooter. Her children and grandchildren called her mama, grandma, grand-Nana, and Nana all of those names leave a lasting impact and legacy for those behind to strive for. Nana will be truly missed. The family will receive friends at the home of Barbara and Sam Kenworthy at 204 Tartan Trail Southern Pines, NC 28387. Visitation will be held on Friday July 22nd in Siler City, NC at Smith and Buckner Funeral Home from 6-8. The funeral will be held Saturday 23, 2016 at Smith & Buckner Funeral Home Chapel at 2:00 PM. Burial will follow at Lee Memorial Gardens in Sanford, NC.
To order memorial trees or send flowers to the family in memory of Odette DeFone Beasley, please visit our flower store.