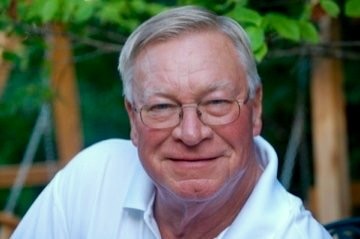 Michael "Mike" Dixon Justice, 72, of Shannon Drive, Siler City died Tuesday, July 5, 2016 at his residence. Mike was born in Norfolk, Virginia on September 20, 1943 the son of Everett B. and Nellie (Dixon) Justice. A 1961 graduate of Jordan Matthews High School, Mike served in the National Guard and retired from the NCDOT after 36 years of service. He was a coin and baseball card collector, and he enjoyed watching sports, deer hunting, and working in his yard. Throughout his life he was an avid golfer, playing at least twice a week with his golfing buddies. He was a devoted, loving husband, proud father and grandfather, and a loyal brother and friend and an avid Duke fan. He is survived by his loving wife of 30 years: Sandra (Fields) Justice; one daughter: Leigh-Anne Justice Lancaster and husband, Haze of Raleigh; one son: Jeffrey Michael Justice and wife, Jennifer of Apex; one brother: Paul David (P.D.) Justice and wife, Vicky of Siler City; grandchildren, Hazen and Burke Lancaster of Raleigh, Samantha and Emily Justice of Apex. The family will receive friends Thursday, July 7, 2016 from 6:00 – 8:00 PM at Smith & Buckner Funeral Home, 230 North Second Avenue, Siler City. The funeral will be Friday, July 8, 2016 at 2:00 PM at Oakley Baptist Church, 2300 Siler City-Glendon Road, Siler City with Rev. Eddie Ellison and Rev. William Fields officiating. Burial will follow in Chatham Memorial Park, Siler City. Memorials may be made to American Heart Association/American Stroke Association, Mid-Atlantic Affilliate, 4217 Park Place Court, Glen Allen, VA 23060. Online condolences may be made at www.pughfuneralhome.com.
To order memorial trees or send flowers to the family in memory of Michael Dixon Justice, please visit our flower store.