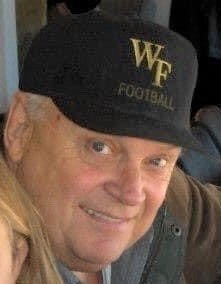 John Grimes, Mayor of Siler City, passed from his earthly home to his Heavenly home on Tuesday, October 20, after only four days under hospice care. He was born March 15, 1943, to John F. Grimes, Jr. and Virginia Williams Grimes. He was proud to have grown up in the small mill town of Cooleemee in Davie County. After graduating from Davie County High School, he received 22 offers of full grant-in-aid scholarships to play football, including one from every school in the ACC. He chose Wake Forest and became the first athlete from Davie County to receive an athletic scholarship to a Division 1 NCAA school. He was inducted into the Davie County Sports Hall of Fame in 2007. After graduating from Wake Forest, he fulfilled his military obligation, serving in the 3/8th Cavalry of the 8th Infantry Division in Germany, retiring with the rank of Captain. In 1968, in response to a letter from his father-in-law asking him to join Cecil Budd Tire Company, he came to Siler City. His career there as a successful businessman spanned 49 years. He was intensely interested in political matters and became the first and only Republican elected to the Chatham County Board of Commissioners during the 20th century. Not only was he elected, he led the ticket, serving from 1994-1998. He then turned his political interests to Siler City, running successfully for District 4 Town Commissioner from 1999-2003. He was re-elected in 2003, 2007, and 2011, and served 10 years as Mayor Pro Tem before going on to win four consecutive terms as Mayor. He was awarded the Order of the Long Leaf Pine, North Carolina’s highest civilian honor for a citizen of our state. He was a former volunteer fireman for the Town, a board director of Capital Bank, an Eagle Scout and a member in good standing of Alcoholics Anonymous for 35 years. He was a member of First Baptist Church where he served as Chairman of the Board of Deacons and taught Sunday School youth and adult men. His last patriotic act was to go to the polls and vote four days prior to his passing. He is survived by his wife of 55 years, Cecilia Budd Grimes of the home; two sons, John Thomas and wife Alysia of Clemmons, NC, and Stephen and wife Marcia of Siler City; a sister, Kathy Januzelli and brother-in-law Jim of Lawrenceville, Georgia; grandchildren Alaina and Andrew, Jonathan, Abigail, Julia, Tucker, Sophia, Daniel, and several nieces and nephews. In a moving tribute by a member of the United States Congress, the family was informed that the American Flag over the Capitol Building in Washington, DC, was flown in honor of US Army veteran John Franklin Grimes, III, on the day of his passing. The flag has been sent to Siler City for use at his funeral. His service will be held Saturday, October 24 on the grounds of Chatham Charter School at 11 am. The family will arrive at 10 am to greet friends. A private interment will be later that afternoon at Mount Vernon Springs Presbyterian Church with full military honors. The service will be broadcast internationally via the web at www.nfiradio.com or may be listened by phone at (347) 215-8049. Pastor Cecil Wilson will officiate. Memorials may be made to Fellowship Hall, Post Office Box 13890, Greensboro, NC 27415 or to Mount Vernon Springs Presbyterian Church Cemetery Fund, 1225 Mount Vernon Springs Road, Siler City, NC 27344. Smith and Buckner Funeral Home is assisting the family.
To order memorial trees or send flowers to the family in memory of John Franklin Grimes III, please visit our flower store.

Family will arrive to greet friends