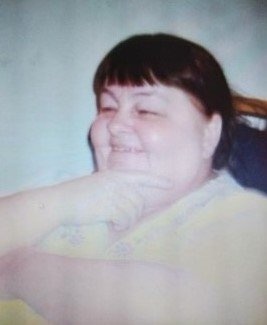 Hilda Hart Berry, 65, of Broadway passed away on Thursday, March 18, 2021 at her home in Broadway, NC. Mrs. Berry was born in Chatham County on April 8, 1955 the daughter of Herbert and Willie Bivens Hart. Hilda enjoyed spending her free time doing crossword puzzles and fishing. She spent all the time she could with her family and loved to be in the kitchen cooking for them. In addition to her parents, Hilda is preceded in death by her husband, Franklin Wayne Berry. She is survived by her sons, Sherman Lynn Berry, George Tracey Berry, and Bryan Keith Berry all of Broadway; sister, Joanna Woods of AL; and brothers, George Hart of Goldston, Herman Hart of Goldston, and Raymond Hart of Bonlee; grandchildren, Brian Michael and Anna Presley Berry. Mrs. Berry will Lie in Repose on Sunday, March 21, 2021 from 1:00-5:00 PM at Smith & Buckner Funeral Home, 230 North Second Avenue, Siler City, NC. A graveside service will be held at 2:00 PM on Monday, March 22, 2021 at Chatham Memorial Park, 13260 Hwy 64 West, Siler City with Rev. Troy Brown officiating. Smith & Buckner is assisting the Berry family. Online condolences may be made at www.pughfuneralhome.com
To order memorial trees or send flowers to the family in memory of Hilda Hart Berry, please visit our flower store.